The Geminid meteor shower over the Very Large Array radio telescope near Magdalena, New Mexico, on the evening of Sunday, December 13, 2015. The VLA was in its most compact “D” formation with the 27 dishes clustered most closely together. Lights from the control building illuminate the dishes to the left. Glows from Santa Fe and Albuquerque illuminate the horizon. This was a dark moonless night. One bright meteor left a long-lasting train the provided the fuzzy “smoke” trail at right.

This is a stack of more than two dozen images, one providing the ground and sky and one bright meteor early in the shoot, and the rest providing additional meteors (22) captured over the 3-hour-long shoot from 8 pm to 11 pm. A total of 334 frames were shot, of which about 30 had meteors: not all are included here - some were very faint or at the edge of the frame, or overlapped other meteors, or were sporadics.

I’ve made mo attempt to position the meteors so they all emanate from the radiant point’s position at the time the base sky image was taken. Over the 3 hours of the shoot the radiant in Gemini, off frame at right here, rose higher, causing the meteors to appear at a steeper angle. Thus, those meteors more parallel to the ground are from early in the shoot, while those at an angle more perpendicular to the ground are from later in the evening.

One bright meteor right of centre appears on two frames (the shutter closed and re-opened while it was still going). This meteor left a long-lasting train that persisted on several frames that are layered in here to add the drifting “smoke” trail. It actually lasted over 30 frames.

Each frame was a 32-second exposure at f/2 with the 35mm lens and with the Canon 6D at ISO 3200. The camera was not tracking the sky – the view is looking northwest toward the setting sky, a direction dictated by the viewing location to get the dishes in the scene. So had the camera tracked the sky the camera would have turned down to th 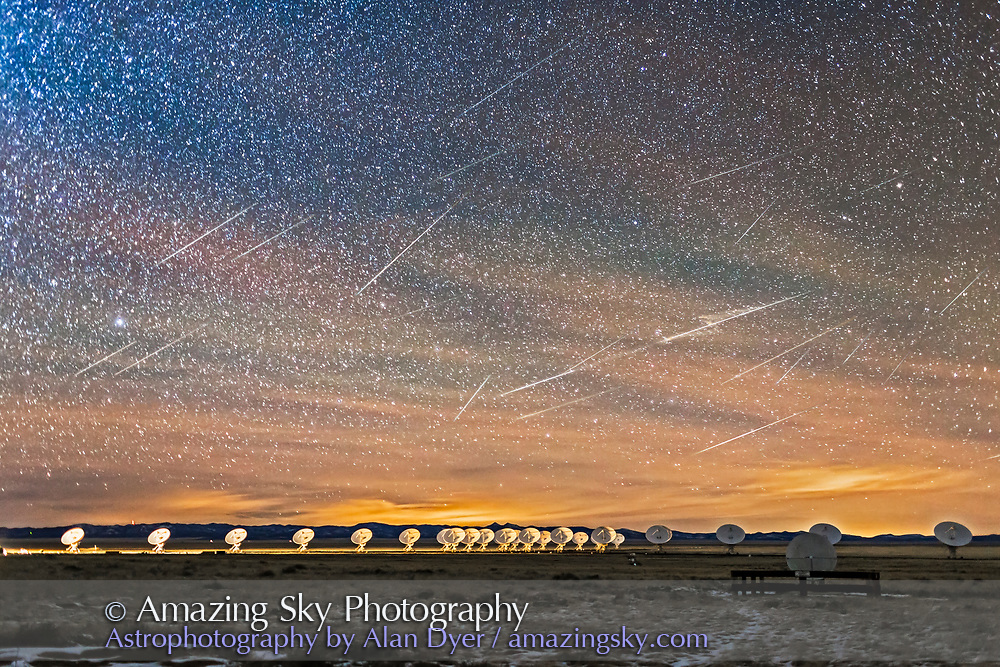