This is the line-up of planets across the southwestern sky on December 6, 2021, consisting of (L to R): Jupiter, Saturn and Venus, with the 2.5-day-old waxing crescent Moon in conjunction below Venus. The Moon had eclipsed the Sun two days before on December 4, when it was on the ecliptic. Two days later it was below the ecliptic line. Jupiter and Saturn are in Capricornus, with its stars all visible here in the evening twilight. The three planets are nicely equally spaced. Such an array makes the ecliptic line visible.

The location is overlooking the Bow River, on the Buffalo Rock Road on the Siksika Nation near Blackfoot Crossing, Alberta.

This is a blend of 4 exposures: 8s, 4s, 2s and 1s to retain details and colours in the brightest part of the twilight sky at right and on the Moon's disk lit with Earthshine. All were at f/2.8 and ISO 400 with the Canon RF 28-70mm lens at 33mm and red-sensitive Canon EOS Ra. Taken in "blue hour." I added a mild Orton glow with Luminar AI.

The 4 images were masked initially with ADP Pro but I then painted the masked manually to eliminate most of the sky from the shorter exposures leaving just the brightest part of the sunset glow without stars, so avoid multiple star images from the untracked camera.

There is a version with lines and labels added in to mark the ecliptic and constellation pattern. 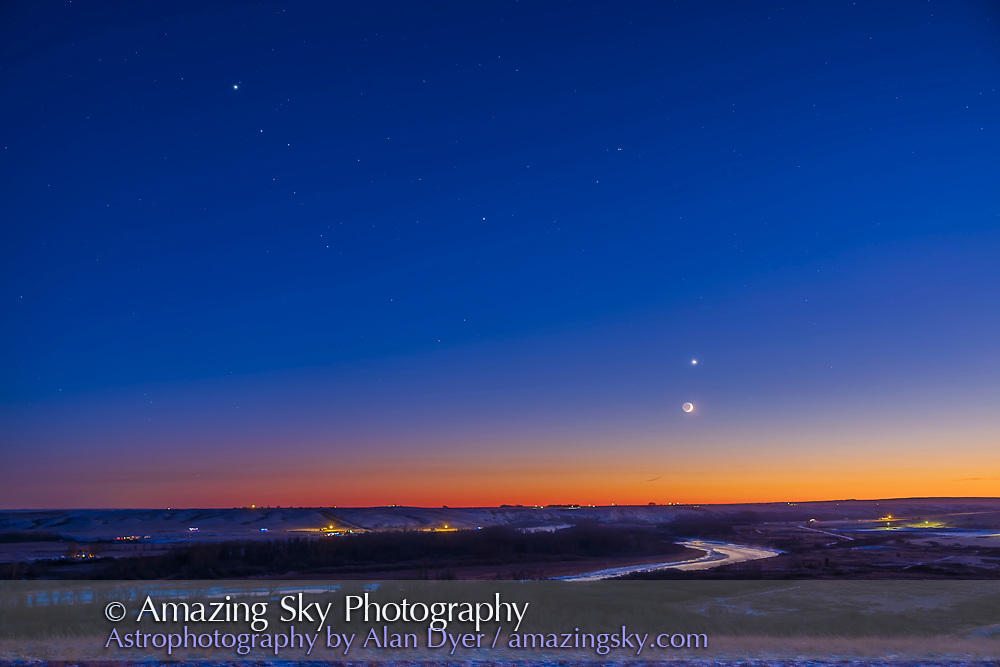