The colourful but obscure area in the Cepheus Milky Way that contains the Lion Nebula (at bottom), a region emitting both red Hydrogen-alpha light and cyan Oxygen III light. It is a nebula that only recently became popular as an astrophoto target, perhaps because of its new nickname and from the use of narrowband filters to bring it out. It is not in the popular Messier, NGC or IC catalogues but is officially labeled as Sharpless 2-132. Meanwhile at top, the brightest nebula is the even more obscure Sharpless 2-135, alongside a very faint band of nebulosity that might not have a catalogue number — I couldn't find one!

The nebulosity at top is a deeper red than the Lion Nebula, as the top area of sky contains more dark dust absorbing and reddening the nebulosity and also decreasing the star density and yellowing the sky compared to the richer, brighter and bluer region at bottom to the south around the Lion.

There is a very small (like a fuzzy red star) planetary nebula just right of centre called the Little Ring Nebula, or M2-51, from the Minkowski catalogue. Another tiny planetary in the extreme lower left corner is Abell 79. The field of view here is 5° by 3.3°, with north up.

The star at upper left is the famous variable and double star Delta Cephei. The yellow star at right is Zeta Cephei. 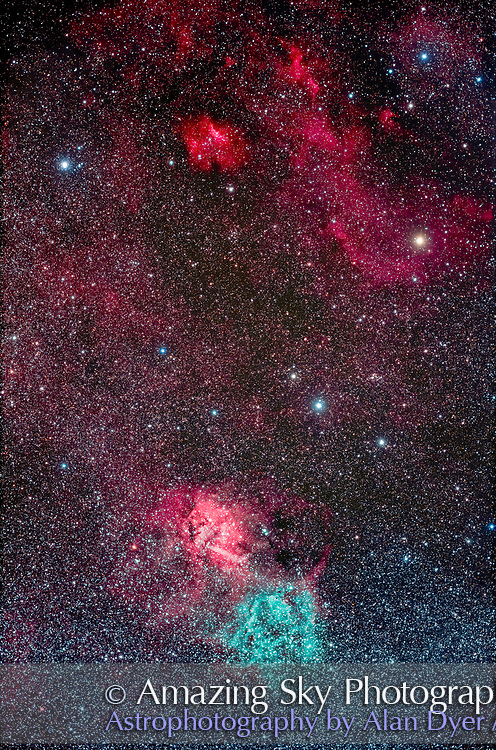