The Moon in total eclipse, on January 20, 2019, in a multiple exposure composite showing the Moon moving from right to left (west to east) through the Earth’s umbral shadow.

I added in two images at either end taken at the very start and end of the umbral eclipse to add a more complete sequence of the lunar motion. However, on those images the lunar disk is darkened mostly by the penumbra.

All images are with the Canon 6D MkII on a Fornax Lightrack II tracking mount to follow the stars at the sidereal rate, to keep the stars fixed and let the Moon drift from right to left against the background stars.

Thus, the Moon images are where they were in relation to the background stars and therefore show the Moon’s motion through the umbral shadow, with the shadow edge on the partially eclipsed Moons defining the shape of the large and circular umbral shadow of the Earth, approximately three times bigger than the Moon. At this eclipse the Moon moved across the north edge of the umbral so we are seeing the top of the shadow circle drawn here in the sky.

At this eclipse the Moon was also shining beside the Beehive star cluster, Messier 44, in Cancer. This was the unique sight at this eclipse as it can happen only during total lunar eclipses that occur in late January. There was one on January 31, 2018 but the next will not be until 2037.

The central image of totality includes a 1-minute exposure at ISO 800 and f/2.8 for the stars, which inevitably overexposes the Moon. So I’ve blended in three shorter exposures for the Moon, taken immediately after the long “star” exposure. These were 8, 4 and 2 seconds at ISO 400 and f/4, and all with the Canon 200mm telephoto.

The two partial eclipse phases are stacks of 7 exposures each, from very short for the brigh 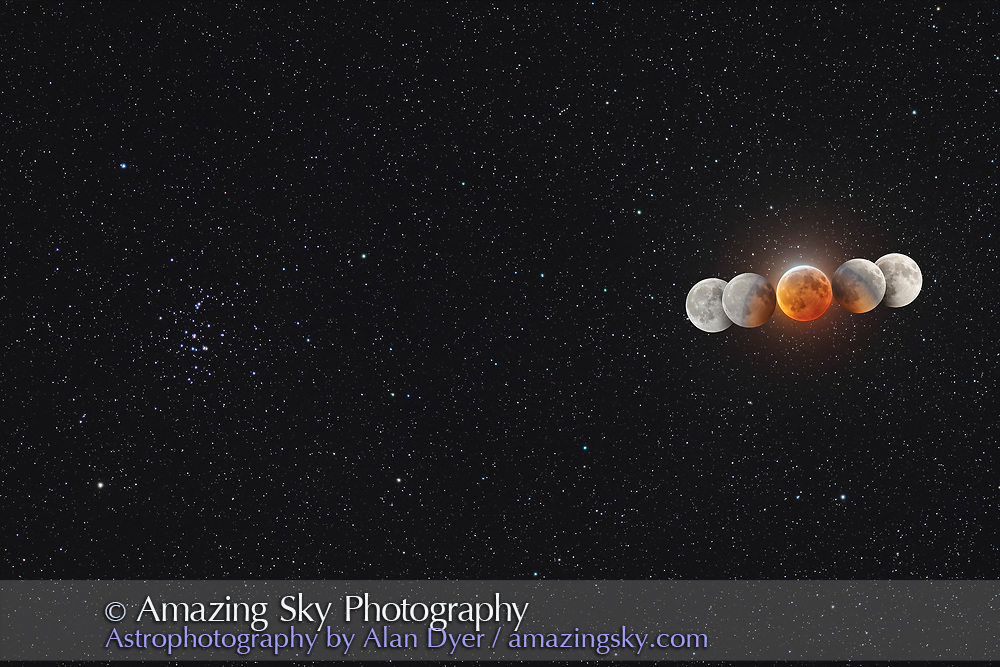