A collage of two images of the Moon and Venus taken minutes apart on April 28, 2020, to show the similarity in their phases this night, April 28, 2020. Both images were shot with the same focal length and camera and so are identical in image scale, to compare their apparent sizes. I have not enlarged Venus, but I have put a frame around it to emphasize that its image has been layered in as a composite.

The Moon was a 5.6-day-old waxing crescent this night, 32% illuminated.. Venus was at its greatest brilliancy, or Greatest Illuminated Extent, with a disk 38 arc seconds across and 27% illuminated, so slightly less.. But the Moon was closer in phase to Venus this night than it would have been the night before with a 5-day Moon. The Moon’s disk appears about 50 times larger than Venus’s.

Just to be clear — Venus was not this close to the Moon! I layered in the image of Venus taken after the Moon image, with both set in the deep blue evening twilight. Venus and the Moon were actually some 30° apart in the sky. But the composite illustrates their mutual phases and disk sizes.

Taken with the 130mm Astro-Physics refractor with a 2X Barlow lens for an effective focal length of 1600mm and with the Canon 60Da APS-sensor camera. The Moon image is the full frame of the sensor, uncropped. Both images are single short exposures at ISO 100. 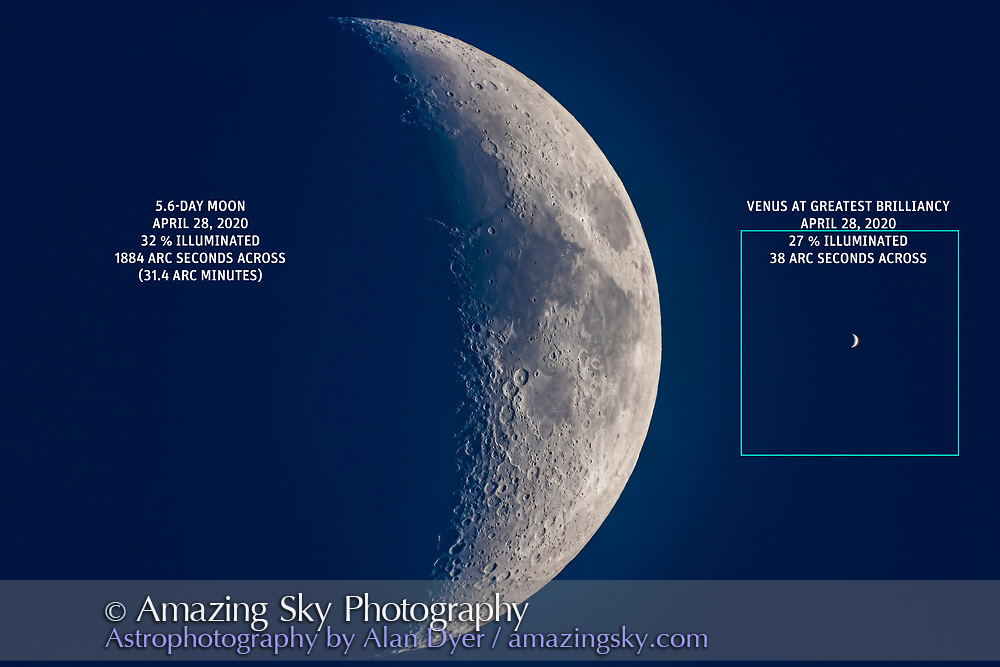