The Milky Way, often described in mythologies as a river in the sky, shines over the Bow River in Banff National Park on a very clear night in early June.

The viewpoint is the famous Morant’s Curve on the Bow Valley Parkway, overlooking the Bow, the CPR rail line following the river, and the peaks of the Continental Divide, including Mt. Temple at right near Lake Louise. The location is named for Nicolas Morant who photographed trains in the Rockies using large format cameras from here when under the employ of the CPR.

Mars is the bright object at centre, west of Scorpius with Antares and Saturn, then to the east, the star clouds of the galactic centre region of the Milky Way above the southern horizon, in Sagittarius. The Milky Way extends up into Scutum, Serpens, and Aquila. The sky is not black but a deep blue from the perpetual twilight in the sky in early June (this was June 4, 2016) at this latitude. Some green airglow also discolours the sky. Several satellite trails are in the sky as well.

This is a stitch of 9 panels to form a partial panorama, looking south and west, each exposure being 20 seconds at f/2.5 with the 24mm Sigma Art lens and Nikon D750 at ISO 5000. Shot with the iPano panning unit and stitched with PTGui. This version of the image has been processed to make the view better resemble what you see with the unaided eye, in a largely monochrome and softer view than the colourful and high-contrast views commonly presented in astrophotos. Even at that there is more fine structure present in the Milky Way than the unaided eye usually sees, though binoculars beging to reveal that smaller detail. I have left some colours in some stars and in the foreground of landscape scenes. 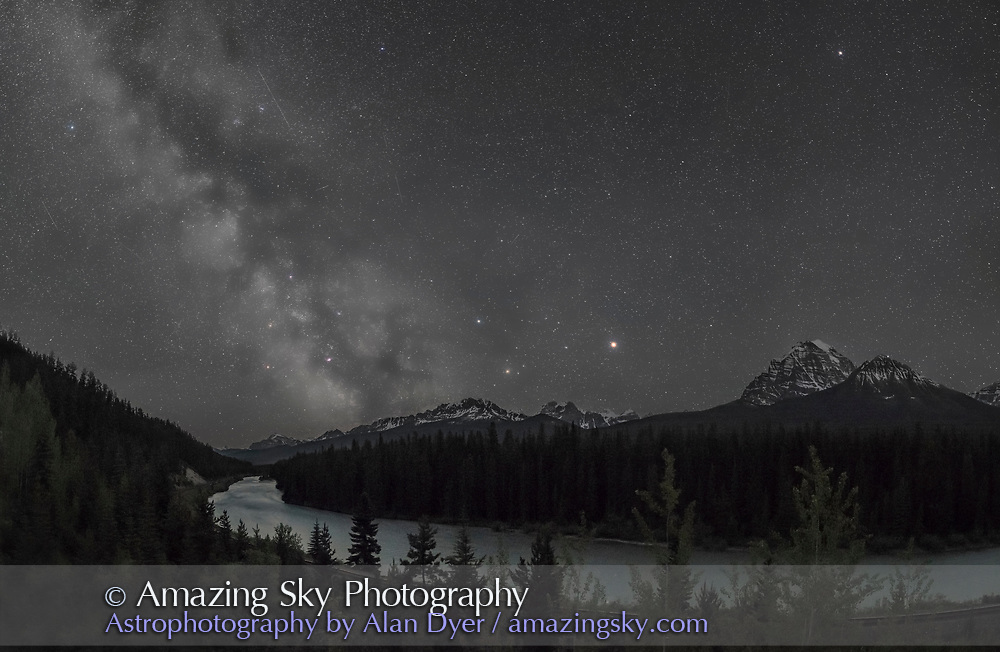