This is a multiple-exposure composite of the total lunar eclipse of Sunday, September 27, 2015, as shot from Writing-on-Stone Provincial Park, Alberta, Canada.

From this location the Moon rose in the east at lower left already in partial eclipse. As it rose it moved into Earth’s shadow and became more red and the sky darkened from twilight to night, bringing out the stars. Then, as the Moon continued to rise higher it emerged from the shadow, at upper right, and returned to being a brilliant Moon again, here overexposed and now illuminating the landscape with moonlight.

The disks of the Moon become overexposed here as the sky darkened because I was setting exposures to show the sky and landscape well, not just the Moon itself. That’s because I shot the frames used to assemble this multiple-exposure still image primarily for use as a time-lapse movie where I wanted the entire scene well exposed in each frame.

Indeed, for this still image composite of the eclipse from beginning to end, I selected just 40 frames taken at 5-minute intervals, out of 530 I shot in total, taken at 15- to 30-second intervals for the full time-lapse sequence.

All were taken with a fixed camera, a Canon 6D, with a 35mm lens, to nicely frame the entire path of the Moon, from moonrise at left, until it left the frame at top right, as the partial eclipse was ending.

The ground comes from a blend of 3 frames taken at the beginning, middle and end of the sequence, so is partly lit by twilight, moonlight and starlight. Lights at lower left are from the Park’s campground.

PLEASE NOTE: The size of the Moon and its path across the sky are accurate here, because all the images for this composite were taken with the same lens using a camera that did not m 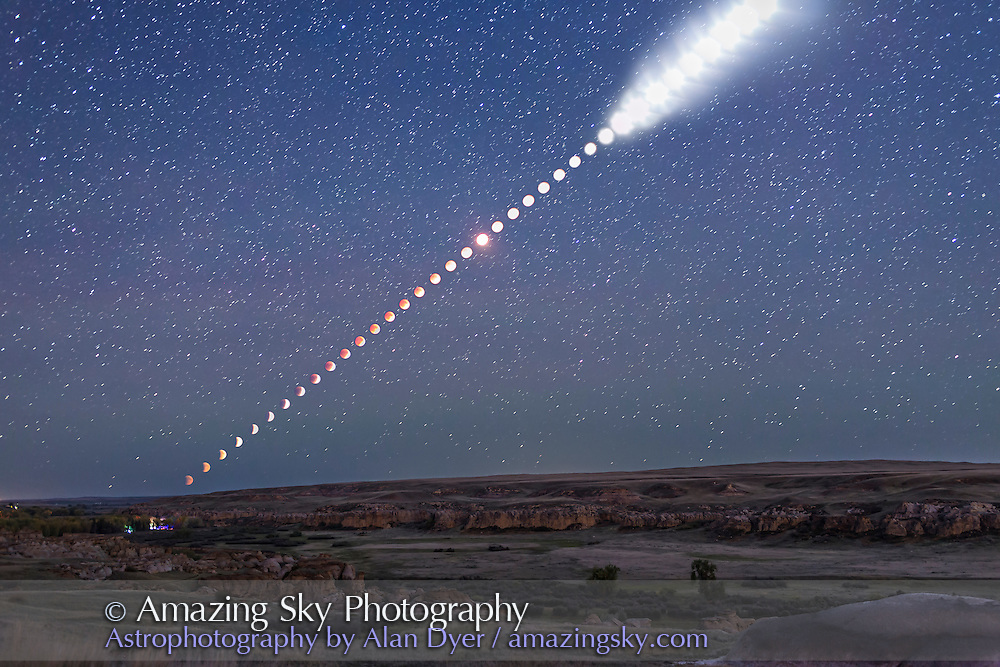