A composite "time-lapse" blend of the setting Full Moon entering the Earth's umbral shadow on the morning of May 26, 2021. I shot the images during the initial partial phases of the total lunar eclipse, pre-dawn as the Moon was setting into the southwest. This shows the Moon moving into Earth's shadow and gradually disappearing in the bright pre-dawn sky. Totality began about 10 minutes after the last image at bottom right was taken, by which time the Moon's disk was too dark and the sky too bright to be able to see the totally eclipsed Moon.

I shot this from a location just south of Rocky Mountain House, Alberta, chosen to be under clear skies at eclipse time, which proved to be the case.

This is a blend of 17 exposures, the last being a 1/4-second exposure with the 85mm Samyang RF lens at f/4 and the Canon R6 at ISO 100, untracked on a tripod. The sky and foreground come from that exposure. The previous images are at shorter shutter speeds (starting at 1/50 second at the start of the eclipse at top left) and generally exposed for the Moon's disk outside the umbra. All are blended onto the base image with a Screen blend mode.

Halfway through the sequence some light clouds intervened.

I shot images at 1-minute intervals but choose only every 5th image for this blend, so the Moons are spaced at 5-minute intervals. The Moon moves its own diameter from east to west in 2 minutes. 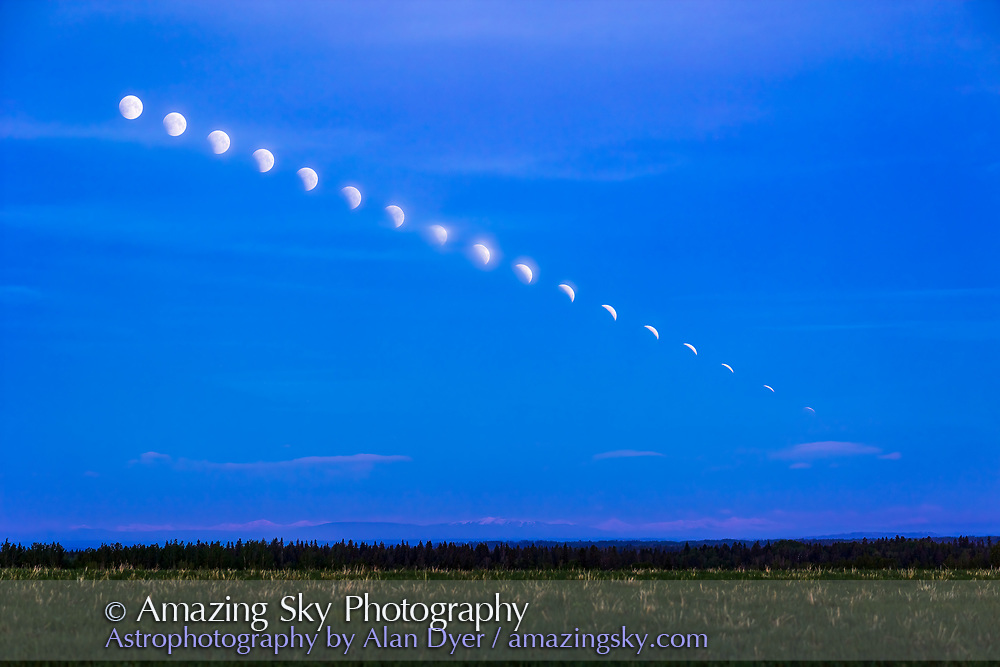