Mars with Cetus and Mira (Annotated).jpg

This was a busy sky on an October night!

This was October 15, 2020 with Mars at centre just two days past its opposition, and so at its brightest, at magnitude -2.6, in Pisces.

In Cetus below, the long-period variable and red giant star Mira (which reaches its maximum brightness only every 332 days) is just past its brightest as well, making it bright enough to be easily naked eye (about magnitude 3.4 here) — it is usually too dim to see naked eye. The name Mira means the “Wonderful”, a name given by Johann Hevelius in 1662, though Mira’s variabilty was discovered in the late 1500s by David Fabricius. Mira is also catalogued as Omicron Ceti.

Also in the frame, though faint, are the outer planets Uranus in Aries and Neptune in Aquarius. Both are also near their brightest for the year as both are near opposition as well.

Some streaks from geostationary satellites are also visible south of the celestial equator in Cetus, as they flare in brightness for a few minutes near the opposition point as they reflect sunlight back from the point opposite the Sun. The geosats are streaked (even though they are stationary in the sky) because the sky is a stack of tracked exposures, with the camera on a tracker to follow the stars and capture fainter stars and the dim outer planets. Geosats flare in brightness like this only in semi-annual seasons around the equinoxes.

The sky is a stack of 4 x 2-minute tracked exposures; the ground is a stack of 4 x 2-minute untracked exposures to keep it sharp, with the two stacks blended and masked in Photoshop. All were at f/2.8 with the 24mm Sigma Art lens and Nikon D750 at ISO 800, and taken from home in southern Alberta. The camera was on the Star Adventurer 2i tracker. Haze and clouds moving in added the star glows. Half an hour later the sky was too cloudy to shoot this. 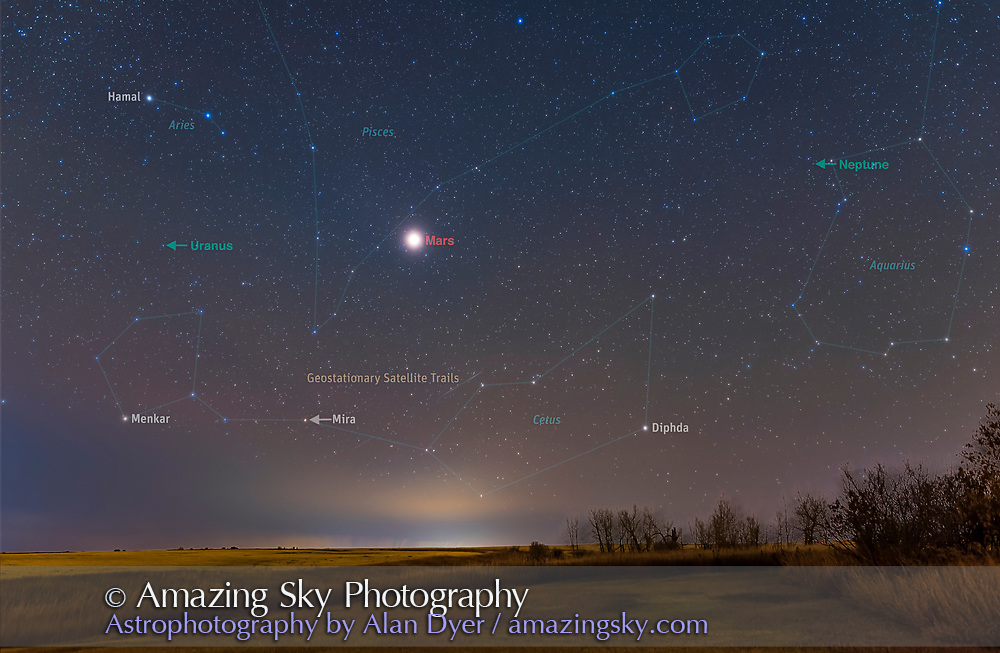