A framing of the faint glow of Gegenschein, or "counterglow," at the point opposite the Sun in the sky, here in Aries and Pisces on this night, October 31, 2021. This glow is from sunlight reflecting off dust particles farther out from Earth in the solar system. The dust might originate from comets or from Mars according to recent research from the NASA Juno probe.

The glow is detectable, as it was this night, with the unaided eye, but it is subtle and easy to miss if you do not know what to look for. The camera picks it up better and the image has been boosted in contrast to enhance the visibility. Doing so also brought out the blue tint to the Gegenschein. The Pleiades and Hyades clusters in Taurus are at left. The stars of Aries are just above the glow. The blue fuzzy spot at upper centre is the galaxy M33.

This is a stack of 8 x 4 minute exposures with the Canon RF 15-35mm lens at 24mm and f/4 to minimize lens vignetting, and on the Canon R6 at ISO 800 on the Star Adventurer Mini tracker. Taken with the field nearly due south. Bands of reddish airglow and some light cloud discoloured the sky but were partly averaged out by the stacking and with gradient adjustments. Taken from home in southern Alberta on Halloween night! 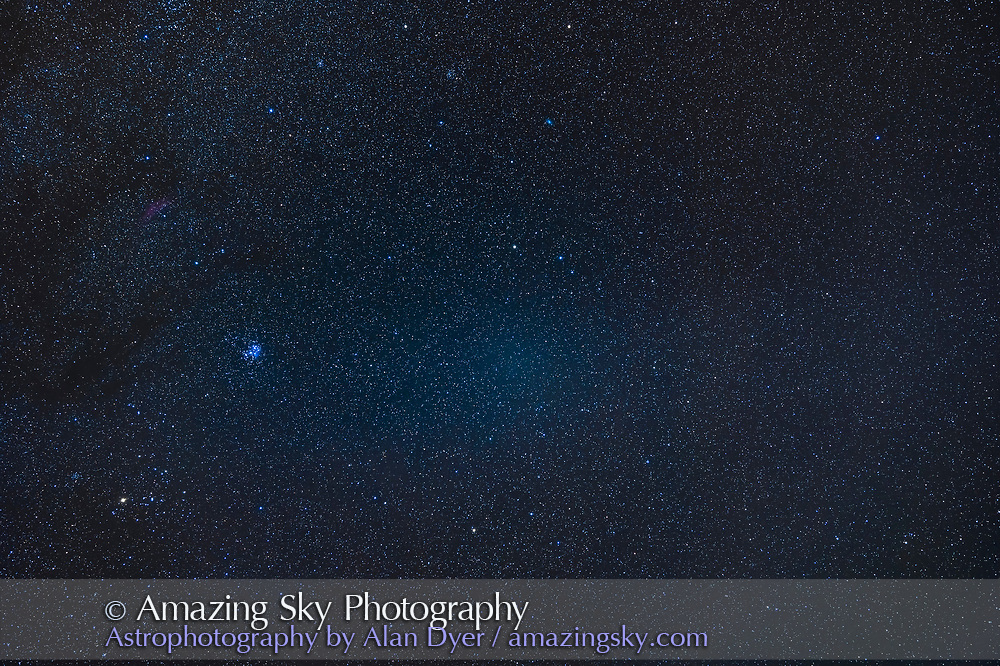