A selfie of the successful eclipse chaser bagging his trophy, the total lunar eclipse of January 20, 2019. This was from a site south of Lloydminster on the Alberta-Saskatchewan border, but just over into the Saskatchewan side. The area promised the best prospects for clear skies this night and predictions proved accurate, and made the 5-hour drive north from home well worth it.

This is an untracked single exposure of 15 seconds at ISO 3200 and f/2.8 with the Sigma 20mm Art lens and Nikon D750. However, I blended in a shorter 1-second exposure for the red eclipsed Moon itself to prevent its disk from overexposing as it would in any exposure long enough to record the Milky Way. The eye can see both eclipsed Moon and Milky Way together in the sky at once, but the camera cannot. So it takes a blend of exposures to show the sky the way the eye saw it.

In the picture is my other camera in use that night, the Canon 6D MkII with a 200mm lens on a Fornax tracker for taking tracked close-ups of the Moon near the Beehive star cluster. The green light is from the dew heater in use around the lens to ward off frost over the 4 hour shoot. 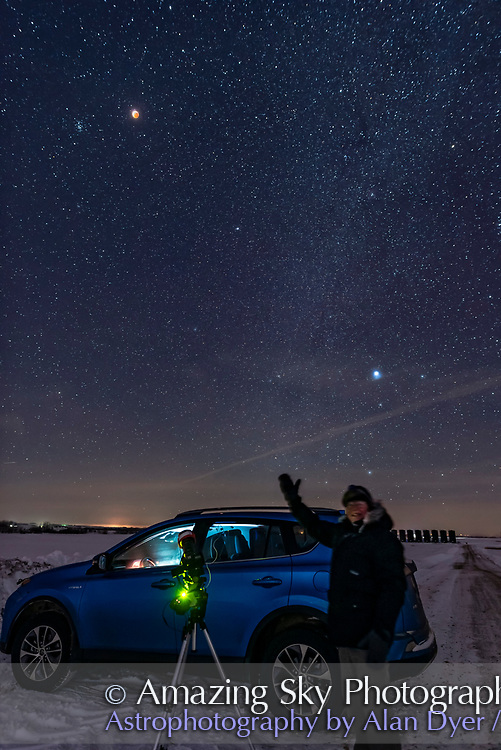