The galactic centre area of the summer Milky Way in Sagittarius and Scorpius low over McGregor Lake reservoir in southern Alberta on a summer night. Jupiter is the bright object at right to the west of the Milky Way; Saturn is dimmer left, east, of the Milky Way. The sky is blue from the lingering summer solstice twilight. The pink Lagoon, Swan, and Eagle Nebulas show up well, despite this being an unmodified camera. Unfortunately, so does light pollution from towns to the south, primarily Lethbridge. The long exposure smooths the water and blurs the reflections which come from one of the static images. The most southely Messier objects, the star clusters M6 and M7, are just visible in and below the band of clouds.

This is a blend of untracked exposures (4 x 1 minute) for the ground, and 4 x 1 minute tracked exposures for the sky, all at ISO 800 with the Nikon D750 and Sigma 24mm lens at f/2.2. Stacking exposures with a mean blend mode smooth noise; the tracking ensures pinpoint stars, but ensuring a sharp foreground requires shooting those exposures with the tracking motor off and blending them later. The tracker was the Sky-Watcher Star Adventurer. LENR employed between exposures. 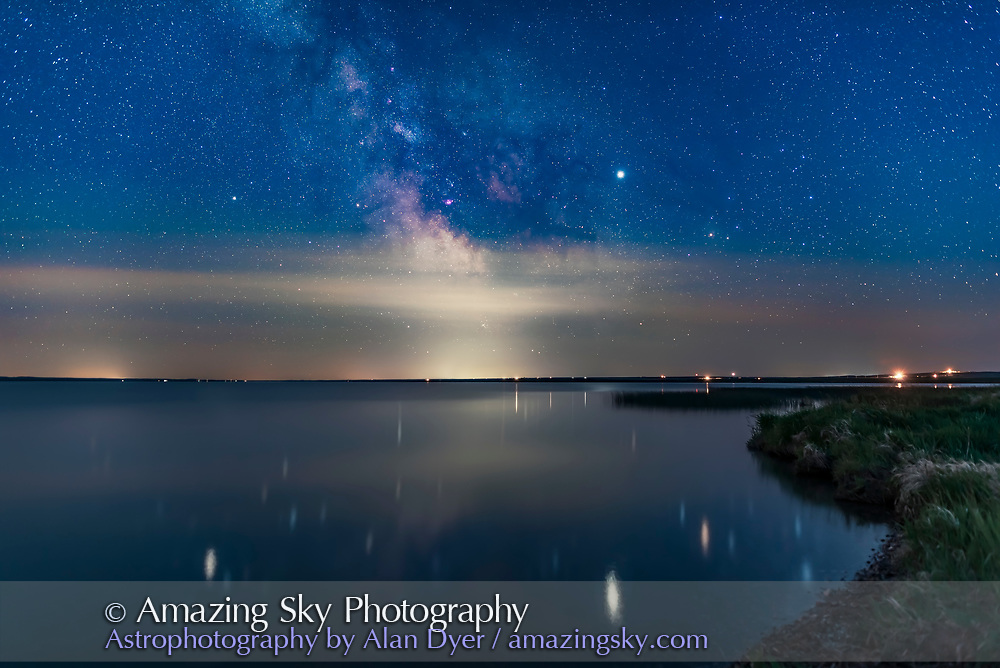