The total lunar eclipse of May 26, 2021, here in the late partial phase, with a bright arc of the Full Moon at the top of the disk still in sunlight. The rest is in the red umbral shadow of the Earth. The same pinkish-red light is beginning to light the distant Rocky Mountains in the dawn twilight. A few stars of Scorpius are visible.

From my location the Moon disappeared into the brightening twilight sky as totality began — the fully eclipsed Moon was too faint to see, as this was a dark eclipse despite the short 15 minutes of totality, surprising, as I was expecting to be able to capture the fully eclipsed Moon in the morning sky. But not so. It was gone from view not longer after this, despite still being up and in clear sky.

I shot this from a location just south of Rocky Mountain House, Alberta, chosen to be under clear skies at eclipse time, which proved to be the case. So despite this being a lunar eclipse widely seen over half the world, a chase was still required to see it! In this case, I drove to a site farther north and into a brighter sky at eclipse time, but with much better weather prospects than sites in Alberta to the south where the sky would have been a bit darker and closer to the mountains. But I was happy to get it!

A blend of 7 exposures showing the partially eclipsed Moon in light cloud and blue twilight at dawn on May 26, 2021. With the 135mm telephoto and Canon EOS Ra, and with images stacked and blended with ADP Pro luminosity mask extension panel in Photoshop. 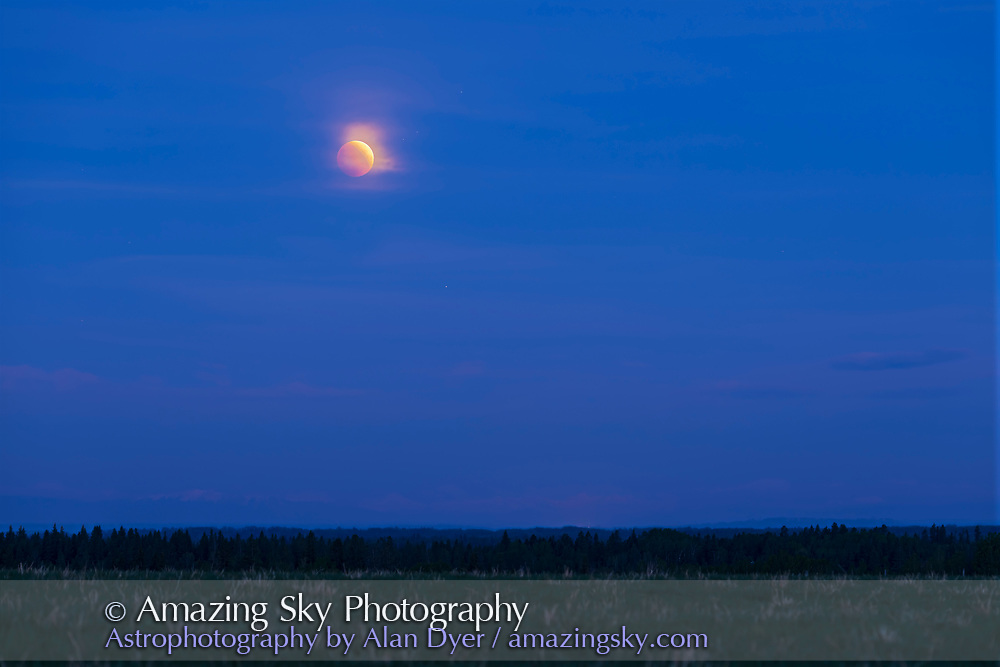