The rising Full Moon of February 27, 2021, the "Snow Moon" of the year. The Moon was technically fullest earlier in the day, some 16 hours before I shot this, and so was slightly past full when it rose for me this evening in southern Alberta.

This is a composite stack of 9 short exposures for the Moon, blended with a single longer exposure for the ground and sky taken at the start of the moonrise sequence. But using the same exposure for the moons as I used for the sky would have resulted in vastly overexposed moons. As it was, I adjusted the exposures for the Moon from 0.6 seconds for the first (lowest) Moon to 1/30 second for the last (highest) Moon, to keep the moons properly exposed through the sequence, as it brightened as it rose. But it remained very yellow throughout due to atmospheric absorption of the blue wavelengths.

The background exposure for the ground and sky was 2.5 seconds. The sky was much darker than the Moon, because it rose nearly 45 minutes after sunset this night, so the sky had darkened quite a bit by moonrise.

All shots were through a SharpStar 76mm EDPH apo refractor with the matching SharpStar 0.8x field flattener/reducer, for an effective focal length of 335mm at f/4.4. The camera was the Canon EOS Ra at ISO 100.

I shot images every 5 seconds, for possible use in a time-lapse. But having images spaced that closely together in time made it possible to select images with the Moon's disk just nicely separated to be touching. While the Moon moves its own diameter every 2 minutes due to Earth's rotation, the effect of atmospheric refraction will make it appear to rise at a different rate when it is closer to the horizon than when it is higher. Having lots of frames to pick from made it possible to pick just the right ones for the correct spacing. As it was, the time between the frames used for this composite was about 2 minutes. 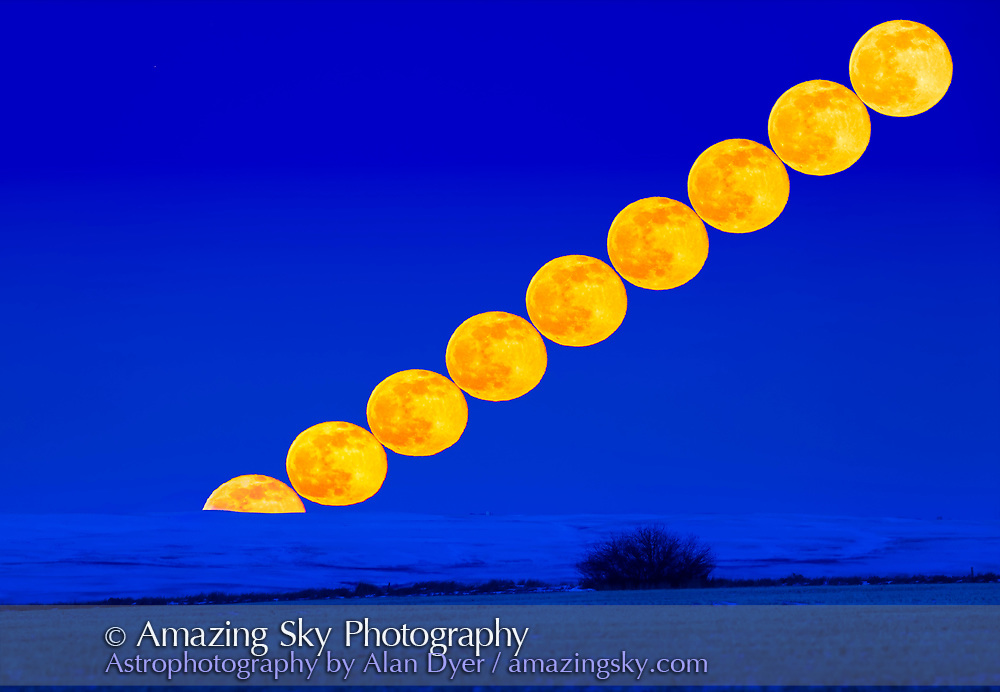