The Moon in mid-total eclipse, on January 20, 2019, with it shining beside the Beehive star cluster, Messier 44, in Cancer. This was the unique sight at this eclipse as it can happen only during total lunar eclipses that occur in late January. There was one on January 31, 2018 but the next will not be until 2037.

This view tries to emulate the visual scene through binoculars, though the camera picks up more stars and makes the Moon more vivid than it appears to the eye.

However, creating a view that looks even close to what the eye can see in this case takes a blend of exposures: a 1-minute exposure at ISO 800 and f/2.8 for the stars, which inevitably overexposes the Moon. So I’ve blended in three shorter exposures for the Moon, taken immediately after the long “star” exposure. These were 8, 4 and 2 seconds at ISO 400 and f/4, and all with the Canon 200mm telephoto on a Fornax Lightrack II tracking mount to follow the stars.

At this eclipse the Moon passed across the northern half of the umbra, leaving the top of the Moon bright, even at mid-totality as it was here.

These were taken from a site near Lloydminster, in Saskatchewan, where skies proved clear all night, better than the prospects back at home 500 km farther south in Alberta. It was worth the drive north the day before the eclipse. 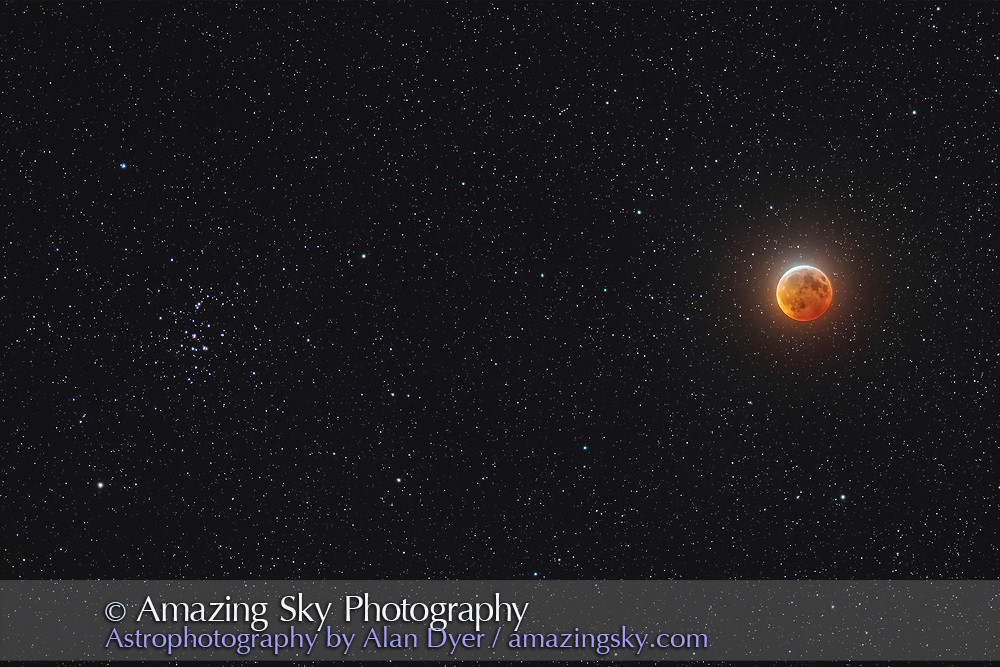