The Canadian Pacific Holiday Train under the stars of winter, including Orion, Taurus and – just rising at lower left – Sirius in Canis Major. The train was stopped in Gleichen, Alberta, on December 7, 2018, at 10 p.m. for a half hour stop and musical show with Terri Clark (on stage here) and band. Hundreds of people attended.

This was a challenge to shoot, to be sure, what with the town lights, the floodlights lighting the stage area, and the lights from the train itself, requiring exposures of a fraction of a second, while the stars needed several seconds. This is a blend of two exposures of 0.4 and 2 seconds, both at ISO 400 at f/2.8. And with the Sony a7III and Laowa 15mm lens. Layers blended with conventional masks. Plus for the long exposure I covered the lens with my hand to hide the lower area of the image to prevent the lights from glaring too much into the sky, but that helped only a bit.

And I had fun applying Orton glow effects with ON1 and Luminar, to the ground and to the sky, plus using the Astronomy Tools actions to add the diffraction spikes on the stars and some of the train lights. A duplicated sky layer blended in with Linear Dodge punches up the stars and sky glows around them. So, yes, this all makes for a processed scene to be sure, but it’s Christmas!

And the sky is real and has not been “cut and pasted” into the scene. The location of the sky at 10 pm was perfect for including the main winter stars above the westbound train. 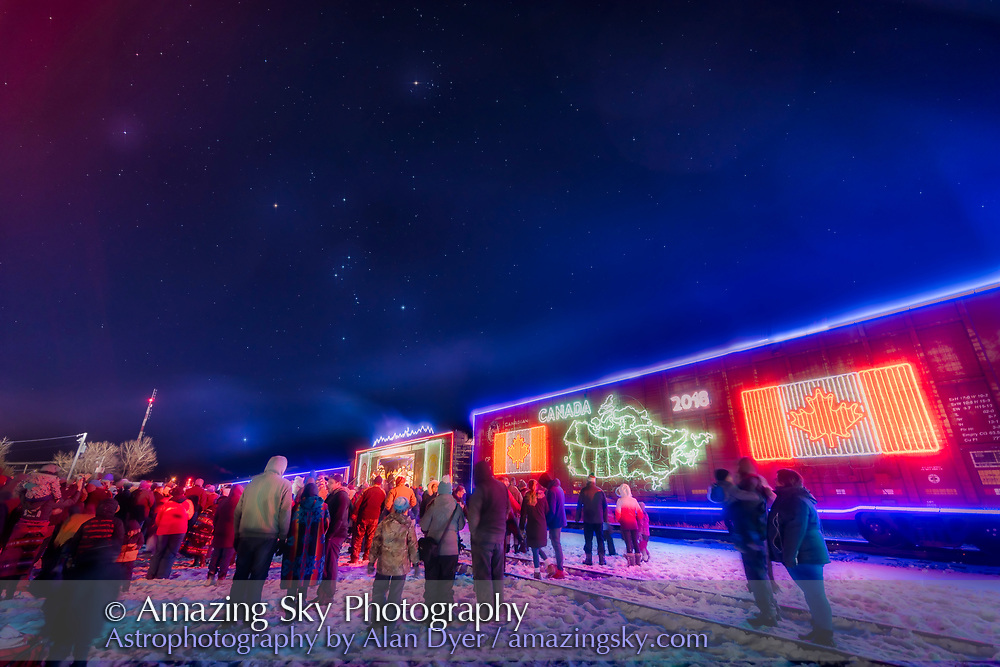