NGC 2070, the Tarantula Nebula, and surrounding nebulosity in the Large Magellanic Cloud. The Tarantula is a massive area of star formation in another galaxy, the nearby LMC in the Local Group of galaxies the Milky Way belongs to. This object, despite being 160,000 light years away, is large and bright enough to see with the unaided eye, but it can be seen only from the southern hemisphere.

The images for this stack were taken January 17, 2019, under a program I uploaded to iTelescope, the robotic telescope subscription service with observatories around the world. This was with the 11-inch Celestron Rowe-Ackerman Schmidt Astrograph, T68, at the Bathurst Observatory in NSW. It is a stack of 8 x 30-second, 8 x 60-second, and one 2-minute exposure, all at f/2.2 with a ZWO 1600 one-shot color CCD camera. The short exposures add the bright core area, to prevent it from being blown out. However, I should have programmed in more long exposures, despite the fast f/2.2 speed of the RASA astrograph. The different exposure sets are blended with luminosity masks. so the short exposures contribute just the bright areas — the nebula cores and bright stars.

The small rich star cluster at left is NGC 2100; the middle nebula of the complex at bottom is NGC 2077. The nebulas in the LMC seem to have a lot of cyan from oxygen emission and are not the deep red of more usual hydrogen-alpha nebulas in the Milky Way.

North is at top in this orientation, with east at left, to match the usual naked eye and binocular view as you view the LMC looking south. The camera’s long axis seems to be oriented north-south, not east-west. Plus being at the prime focus of the RASA astrograph, raw images are flipped mirror image and so need re-flipping to make them match the sky.

This was my first iTelescope session and target, so the program of exposures was a test and experiment. But overall it worked OK. However, it took of month with a couple of reschedules due to cloud and other bookings 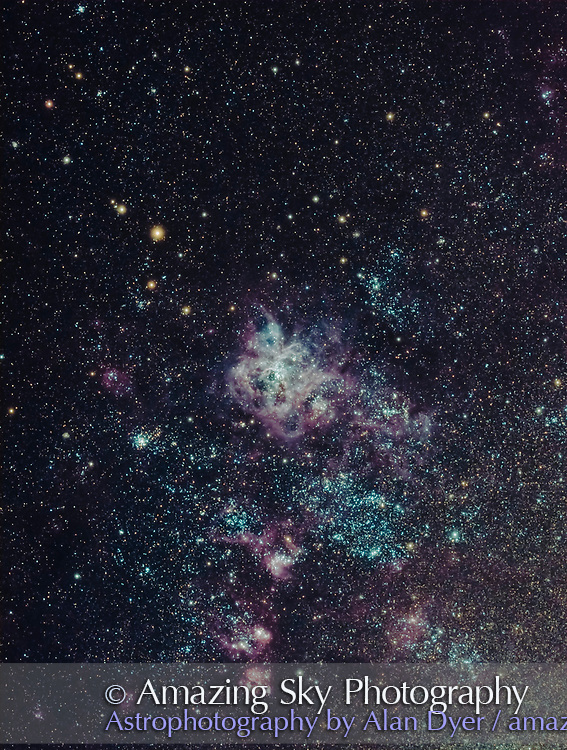