The Dark Emu from aboriginal sky lore rising in the east, on a late March evening in Australia. The Dark Emu is a “constellation” made of dark lanes in the Milky Way. Here, his head and beak are at centre as the dark Coal Sack beside the Southern Cross. The Emu’s neck extends down along the Milky Way through Centaurus and into Scorpius, which is just rising here. Antares and the head of Scoripius are at botttom left above the gum trees, with bright Mars to the left of Antares. The glow at upper left is the Gegenschein.

This scene encompasses much of the splendours of the southern hemisphere sky, including the Large Magellanic Cloud at right, and the Carina Nebula, the red patch right of top centre. At centre is the Southern Cross, or Crux. Below it are the paired stars of Alpha and Beta Centauri.

The foreground is illuminated only by starlight, though when I shot this the last quarter Moon was about to rise and so was beginning to light the sky a deep blue.

This is a stack of 5 x 2 minute tracked exposures at f/3.2 with the 15mm full-frame fish-eye lens, and filter-modified Canon 5D MkII at ISO 3200 for the sky, plus a single untracked exposure at ISO 800 for 8 minutes at f/2.8 for the ground to eliminate blurring. I shot the ground shot immediately after the last sky shot, by simply turning off the tracker’s motor.

Where the two images, tracked sky and untracked ground, meet there are blurred silhouettes of the trees. I used the iOptron SkyTracker. 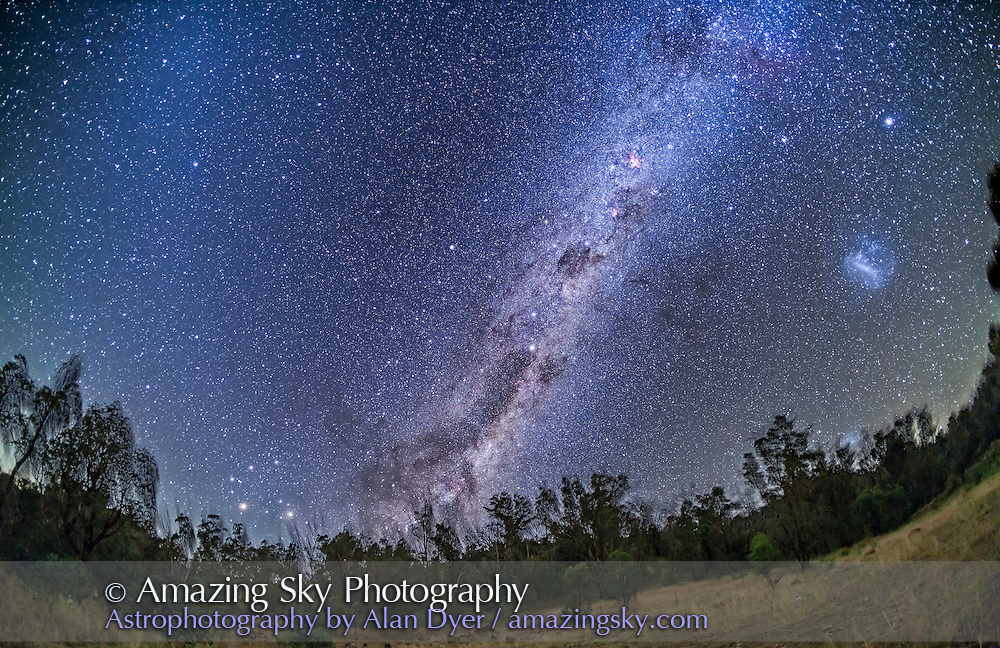