Venus shines brightly, and nearly at its brightest at magnitude -4.7, in the dawn sky on a very frosty morning at 5 am, on September 17, 2015, from home in southern Alberta.

Venus appears amid the faint glow of the Zodiacal Light, sometimes called the “False Dawn,” stretching vertically from the dawn horizon in the east, up and to the right, and reaching the Milky Way that runs down the frame from top centre to bottom right. Orion and the winter stars shine in the Milky Way, with Sirius above the trees at lower right. The Beehive Cluster, M44, appears as the small group of stars above Venus. The Pleiades, M45, is at top right. Mars is the brightest object left of Venus, with the bright star Regulus just below it and rising in the east. The stars of the Big Dipper are at far left at the edge of the frame. The sky is beginning to brighten with the real glow of morning.

This is a stack of 4 x 2-minute exposures, tracked and mean combine stacked, for the sky and 2 x 2-minute exposures, untracked and stacked, for the ground to minimize blurring in the starlit ground. The Canon 6D was on the iOptron Sky-Tracker, shooting at ISO 1250 with the 15mm full-frame fish-eye lens at f/3.5. The stacking with a mean combine stack mode smooths noise in both sky and ground. This version of the image has been processed to make the view better resemble what you see with the unaided eye, in a largely monochrome and softer view than the colourful and high-contrast views commonly presented in astrophotos. Even at that there is more fine structure present in the Milky Way than the unaided eye usually sees, though binoculars beging to reveal that smaller detail. I have left some colours in some stars and in the foreground of landscape scenes. 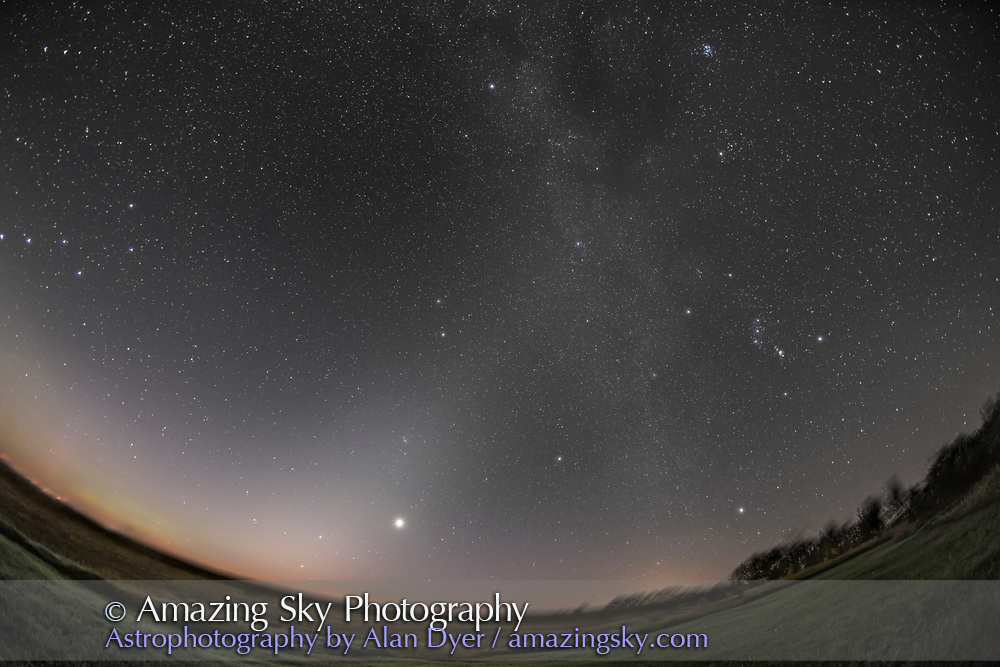