The Milky Way arching over Emerald Lake and Emerald Lake Lodge in Yoho National Park, BC. This was on June 6, 2016 and despite it being about 1:30 am, the sky, especially to the north at left, is still lit by blue twilight from the short solstice night.

Unfortunately, the lights from the Lodge, in particular one bright unshielded sodium vapour light, illuminates the foreground and even across the lake. The lights are themselves not overly bright but the long exposures in such images really brings out how much they do light the night landscape. They should be shielded or reduced in number, or put on motion sensors to light only when necessary. Or all of the above!

The Summer Triangle stars are at centre top. High haze fuzzes the star images. Vega is the brightest star at upper right.

My other camera is at left, on a tripod, shooting a time-lapse sequence. I could have cloned it out but decided to leave it in.

This is a panorama over about 180°, made of 24 segments but cropped in quite a bit from the original, and all shot on the iPano panning unit. Each exposure was 30 seconds at f/2.2 with the Sigma 24mm lens and Nikon D750 at ISO 4000. One short exposure of the lodge was blended in to reduce its light glare. Stitched in PTGui. The original is 15,000 x 9,000 pixels. 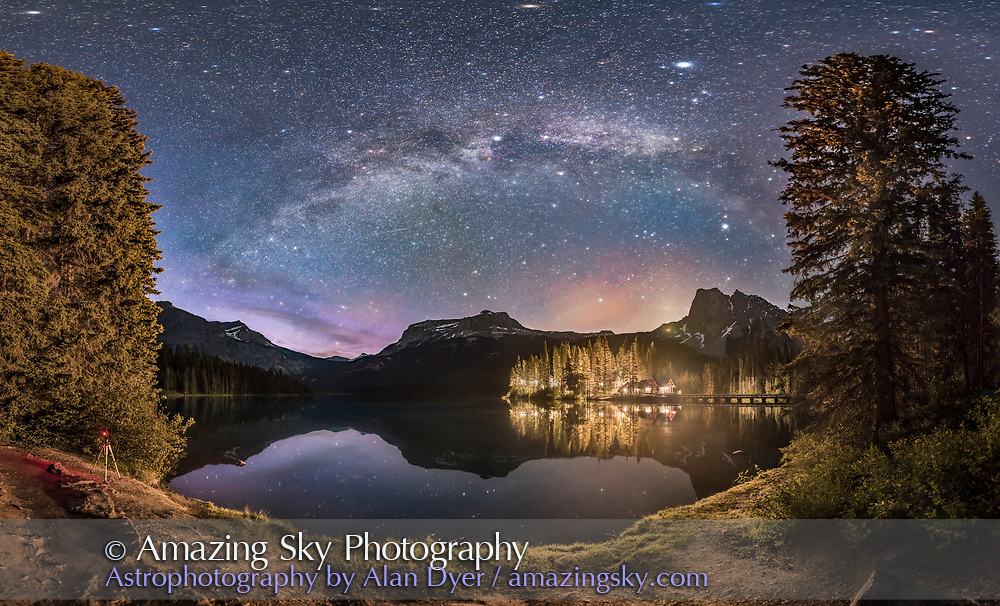