A mosaic of the 11-day-old gibbous Moon, on March 17, 2019, showing the full disk and extent of incredible detail along the terminator, the dividing line between the day and night sides of the Moon where the Sun is rising as seen from the surface of the Moon.

At bottom in the south, Tycho is brightening and its rays are now obvious splashing across the lower half of the Moon. At lower left on the terminator is the elongated crater Schiller. The rim of another large crater, Schickard, is just beginning to catch the Sun. The most famous of the craters along the terminator at this phase in Artistarchus, one of the brightest spots on the Moon. Below it, Marius is site to a complex of volcanic hills. The vast expanse of Oceanus Procellarum the Ocean of Storms, is coming into sunlight. Amid that ocean Copernicus and Kepler and their ray patterns are obvious.

On the western shore of Imbrium the curving arc of Sinus Iridum is now better lit than a day before.

To the eastern side of the Moon craters are now lit by a high Sun and reveal their bright rays structures. A good example is Proclus.

I have boosted the colour saturation and contrast somewhat to bring out the colour difference between the grey Sea of Serenity above center and the bluish Sea of Tranquillity right of centre. Plus differences in the colours of the lava flows in Mare Imbrium show up now.

This is a panorama or mosaic of ten images, five covering the western side from south to north, and five covering the eastern side, taken through a Celestron C9.25-inch SCT telescope but also with a Canon 1.4x telextender to increase the effective focal lengh even more to 3300mm at f/14. Each segment is a single exposure at ISO 100 of 1/50 second with the Sony a7III. Stitching was with Adobe Camera Raw using Perspective projection. 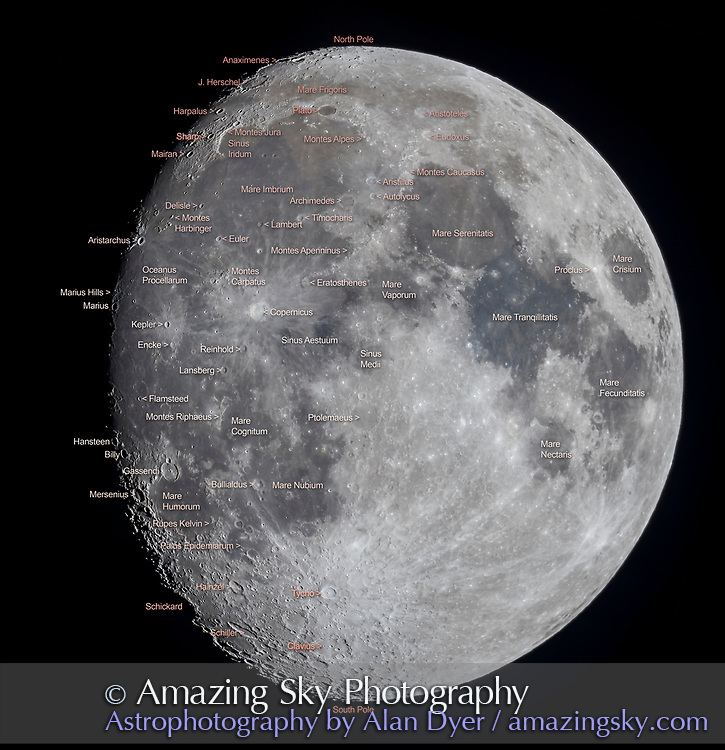