A pass of the International Space Station with Canadian astronaut David St. Jacques on board, on the evening of January 26, 2019. I started the sequence just before 7 pm MST. The ISS is moving from right to left, southwest to southeast.

The ISS faded and reddened naturally into sunset at top left in Taurus. Just before it did that it passed through the Hyades star cluster and just missed Aldebaran.

Interestingly, the ISS seemed to track along the ecliptic here, made somewhat visible by the faint arc of the Zodiacal Light reaching up from the horizon at right and stretching across the sky to the upper left. The ISS coincidentally travelled parallel to, but just below the Zodiacal Light, which follows the ecliptic.

Some red streaks of airglow are also visible, and I emphasized those in the colour correction to make a more colourful sky. I did the opposite to the light polluted clouds! But their yellow remains. Pity.

I shot this from home, with the oft-photographed old farm rake as a foreground element.

This is a stack of 8 x 30 second exposures, but with the ISS trails masked and blended with Lighten mode onto a single 30-second exposure taken just before the first ISS image. This yields a background sky with minimum star trailing. However, the ISS is trailed over the 4 minutes it traversed the sky from southwest (right) to southeast (left). All were with the 15mm Canon full-frame fish-eye lens at f/2.8 and Canon 6D MkII at ISO 3200. I added small cloned ISS trail bits to fill the gaps between the exposures caused by the 1-second interval, to make a continuous trail, despite it being from 8 exposures. 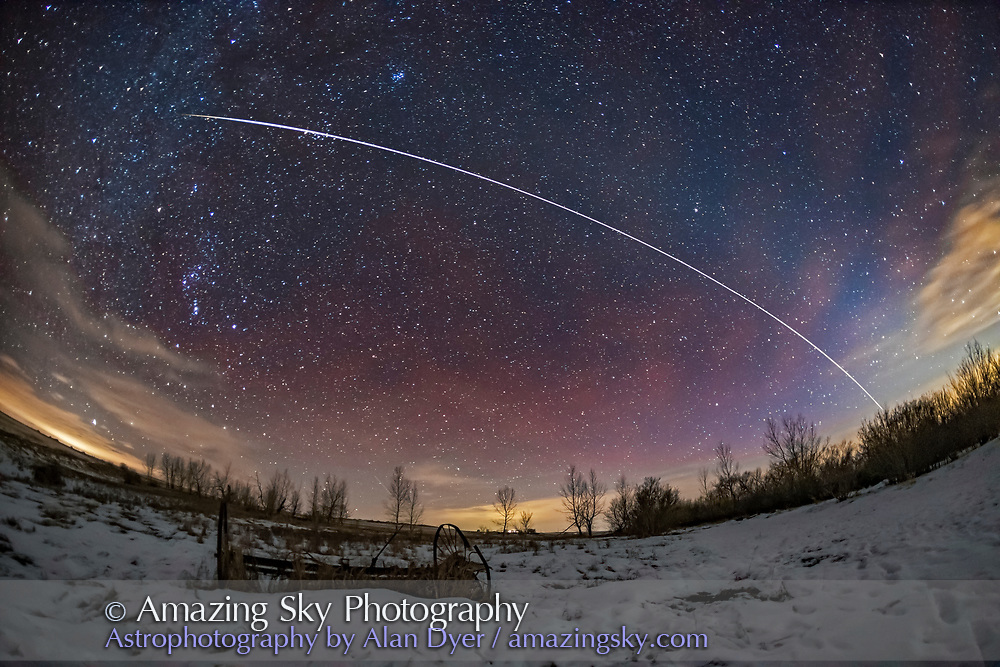